We had an interesting discussion going on in the comment section of the post entitled City elections around the corner.
Among the comments were the following:

Anonymous January 24, 2013 at 11:33 PM
No I'm saying they don't have enough officers on the street. They (elected officials) are constantly talking about how safe Bossier is but the fact is there is more crime today and it's getting worse. They use this figure they call "crime rate" to say what they want it to say. Ask any of them how to figure the "crime rate" and I bet they can't answer that. But yet every year they crime has decreased. All I'm saying is hire enough officers. According go my sources BCPD works with only 7 or 8 officers per shift. They have had to eliminate several divisions within the department just to be able to do that.

Anonymous January 25, 2013 at 8:22 AM
The budget presented by the mayor and approved by the city council for the last two years has money for an additional 20 cops. Why does the department not hire them? That is not a City Council question. The money is approved and it is shown in publicly, monthly, in the finance report.

Anonymous January 27, 2013 at 11:15 AM
The money is there for the officers. Unfortunately, the pay is substantially lower than competing agencies, so the department usually loses out.

Anonymous January 25, 2013 at 9:49 AM
That is not true. I haven't seen anything in any budget that gives the chief of police money to hire 20 officers.

I did receive a copy of the manning report for the city. The budget is fully funded and there is money there to hire additional officers. Of course, there is a constant flux of employees, some hired, some retiring or moving somewhere else.
But the money is there for more hires (12 at this point) and I’m sure the chief does everything in his power to keep the department up to force.

The Inquisitor put this out for public view from their website, so I am taking the liberty of copying it in full.
The first order of business is to help find this guy. He has a long history of multiple DWI's and there are going to be a lot of questions to be asked and hopefully answered in this case. 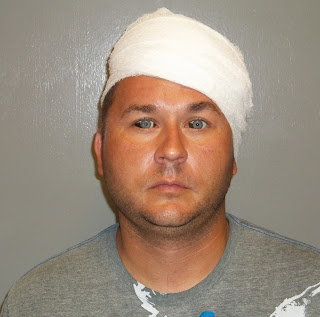 Bossier Parish Sheriff's deputies are desperately trying to locate a Minden area man mistakenly released from jail despite the fact that he is facing felony charges in Bossier and Webster parishes.
Wesley Allen Haynes, 35, of Minden was facing charges in Caddo, Bossier, and Webster Parish on multiple charges and was in the Caddo Correctional Center facing charges in Caddo Parish, when a Bossier Sheriff's deputy sent a fax to the Caddo Parish Sheriff's Office that stated all warrants in Bossier had been recalled and that they no longer had a hold on him in Bossier Parish.
Bossier Sheriff's Spokesperson Lt. Bill Davis said the fax sent to Caddo Parish was incorrect, which resulted in Haynes being released from custody.
Bossier-Webster Parish District Judge Jeff Cox, who is presiding over multiple offense DWI cases in both Bossier and Webster Parishes involving Haynes, issued warrants in both Bossier and Webster for Haynes arrest.  Cox stated that there would be no bail because he believes that Haynes is a danger to the public.
Davis said the Bossier Sheriff's Office is aggressively pursuing Haynes' arrest and is asking the public for any information on his whereabouts.
If you have any information on where Haynes may be located, the Sheriff's Office is asking that you call (318) 965-2203 or that you dial 911 in the area where Haynes is spotted.
You can go to The Inquistor to subscribe to their online edition.
Posted by Jim at 10:51 PM 1 comment:


The Bossier Parish School Board voted to add four additional resource officers to serve the elementary schools in the district on a rotation basis. Middle schools and high schools in Bossier Parish already have resource officers assigned to them.
I have heard discussion both pro and con. I come down on the pro side. One of the arguments that I have heard against the measure is that we have had no shootings in our schools. While that is true, and hopefully will remain true, I’m sure the people who have suffered school shootings could have said the same thing. While there is no guarantee that an armed guard could stop a shooter, he has a much better chance than unarmed school staff.
I have a granddaughter who is in first grade in a Bossier school. I asked myself whether I would feel better if the school had an armed person on campus or not. I believe that I would feel better about it.
While it is a shame that it is necessary, I believe that erring on the side of protecting our children is better than the alternative.
Arming trained teachers is another question for another day. Right now, we’ll deal with the situation as it is.

City elections around the corner

Elections for Bossier City Mayor and Council are fast approaching.
The primary election will be held on April 6th, and in case of any runoff, the general election will be held on May 4th.
It appears that Mayor Lo Walker is a shoo-in for a third term. Bubba Williams had considered a run for it, but decided against it.
Incumbent Councilman Scott Irwin has a challenger in retired policeman and restaurant owner Mike Beam in his South Bossier District. Here is a link to Beam's Facebook page.
David Jones is stepping down, and the only name I have heard tossed around in that district is Jeff Free. He has been attending council meetings and getting prepared.
Will Tommy Harvey go for it again, after losing by two votes to Larry Hanisee in the special election for District 5? I think so.
I'll have some more up soon on the individual races and candidates. 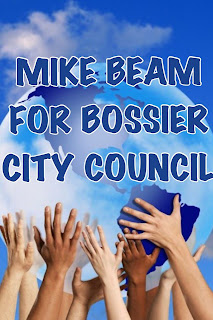