Ryan Gatti, candidate for State Senate District 36, will end a month of district wide meet and greets and town hall meetings with an event in Minden on August 27 at Orleans on Main.  The public is invited to the event that starts at 6:00.  Gatti has spent the past few weeks traveling and getting to know people from the smallest towns in the district, areas often forgotten by elected officials in Baton Rouge.

“The needs and concerns of these small towns is so personal and often times, very unique, however, very few people take the time to really get to know these issues and spend time in the towns with the people who live there.  I’ve gotten to know place likes Castor, Sibley, Plain Dealing and Doyline.  I’ve come to know what they really care about and will be able to truly represent them as the State Senator for District 36.  I look forward to having the same conversation with the people in Minden Thursday night and I will keep visiting this entire district, long after election day, because energetic and present leadership is what we deserve,” said Gatti.

About Ryan
Ryan Gatti is running to replace Senator Robert Adley for the seat that represents constituents in Bossier, Webster, Claiborne and Bienville Parishes.
For the last 15 years, Ryan Gatti has served Northwest Louisiana as a Bossier based attorney and small business owner. He has helped countless families going through their toughest times, including families dealing with situations resulting in traumatic brain injuries. He served as President of the Bossier Bar Association and in 2013, he was selected to receive a Crystal Gavel Award for his commendable efforts in aiding the administration of justice by gathering and reviewing a significant number of cases on behalf of the 26th Judicial District Court. Ryan also sat as District 1W Judge in Shreveport from 2007-2009, presiding over Workers’ Compensation trials.
A lifelong conservative, Ryan is the Vice President of the Republican Party of Bossier Parish.  An active member of First Baptist Church of Bossier, he is both a deacon and teacher for kids and youth, and has participated in mission trips to impoverished parts of the world such as Haiti, El Salvador and Mexico. Ryan has also served as a trustee on the Ethics and Religious Liberties Commission of the Southern Baptist Convention since 2012. He also volunteered as a coach of Dixie League Softball and Upwards Soccer.


Ryan is a graduate of Airline High School, LSU and LSU Law School. He has been married to Susan Gatti, Ph.D. for over 18 years.  Together they have created their greatest accomplishments – their four daughters Katherine (15), Elizabeth (12), Rebecca (8) and Charlotte (5).
If you are a candidate for office and would like to address the voters with your platform for office, please send a few paragraphs to mybossier@gmail.com and we will publish it.  Attach a picture if you like and we’ll include it.
Posted by Jim at 2:56 PM 3 comments:

Todd Hollenshead, a small businessman, farmer, and Louisiana native, has announced his candidacy for the Louisiana Senate District 36 seat representing all of Webster Parish and parts of Bienville, Bossier and Claiborne parishes. The seat is currently occupied by Robert Adley of Benton, who is term-limited.  The primary election is October 24.
Hollenshead is concerned about the state’s $700 million annual budget deficit, the rising cost of college tuition, industry leaving the state, and the struggles facing Louisiana-based small businesses. He is pro-life, pro-traditional marriage, and supports gun rights.
“I believe our state needs new direction. We need leaders who will work hard for Louisiana and not be tied to the lobbyists and out-of-state special interests. I will listen to the concerns of our small-business owners, working families and the middle class and get to work for them.”
“There is nothing like having a grandchild to make a person want to improve their community,” Hollenshead said.  “That is one of the main things driving me to seek this Senate seat. So that not only my children, but all of our children, have the same shot at the American Dream that I did.”
Hollenshead also said he would fight for what is best for local schools and retirees, “It’s time to get our state government back to the basics. To start, we need local control of our schools. Across the board, lobbyists and out-of-state special interests have too much influence in Baton Rouge. I will listen to voters and defend our common values.”
Hollenshead is a senior project manager for Waste Management’s Minden office.  In his position he manages heavy construction projects for clients across the country.
Hollenshead also raises Charolais cattle on his family’s Bossier Parish farm.  In 2010 he was named USDA Outstanding Farmer of the Year for Bossier Parish.
Raised in Bossier Parish, he has been married to the former Michelle Perry for 25 years, and they have four children and one grandchild.  He and Michelle have been members of the same Benton church for over a quarter of a century.
Hollenshead earned a degree in geology from Louisiana Tech University after working his way through school in the oilfield of Caddo and Webster parish.  He is a private pilot and also has been a Bossier Parish Sheriff’s Reserve officer for seven years.  He and his wife are active in their church youth group, school tutoring programs, Boy Scouts, Court-Appointed Special Advocates, the ACTS retreat, and a local non-profit organization, Pick-it-Forward for Orphans.


For more information please contact James Sonneman at 318-510-1391 or visit the campaign’s website at www.todd4senate.com.
If you are a candidate for office and would like to address the voters with your platform for office, please send a few paragraphs to mybossier@gmail.com and we will publish it.  Attach a picture if you like and we’ll include it.
Posted by Jim at 4:04 PM 2 comments:

A Tribute to Fallen Officers

Last year on this date I published In Memory of Trey Hutchison. Today we honor him again. This young man gave his all serving the people of Bossier City when he was ambushed eleven years ago while walking up to a house on Jana Place after a 911 hangup call. The person who shot him had stated that he intended to kill a police officer before he died. He killed himself before police got entry to the house.

This year this sad memorial comes on the heels of a heart wrenching week. Last Wednesday, Shreveport Police Officer Thomas LaValley was killed in much the same way. He was answering a call when he was shot and killed. The person who shot him was wanted on a warrant for attempted murder, but Officer LaValley had no way of knowing that he was at the residence. While Officer Hutchison’s killer had specifically stated that he wanted to kill a police officer, the individual who killed Officer LaValley didn’t care who he killed.

I watched the memorial service for Officer LaValley that was held at Summer Grove Baptist Church (thanks to KTBS for streaming it). It was a wonderful service; Mayor Tyler delivered the perfect remarks, as did Chief Shaw. It was good to hear Chief Shaw tell Officer LaValley’s family that if they ever needed anything, they didn’t have to come to Shreveport, but only to call. Shreveport will go to them. I won’t post more on the week or the events, we all watched on TV and online as the procession made its way down the state, and we all saw the outpouring of respect from police agencies and citizens all the way to Gonzales and then to St. Amant for his funeral & burial.
It is fitting and proper to honor these two young men, not just today but every day. I know that it is cold comfort to their families, but it is important that they know that we grieve for them and will never forget their loss.


God Bless them.
God Bless all who serve and protect.
Posted by Jim at 12:54 PM 2 comments: 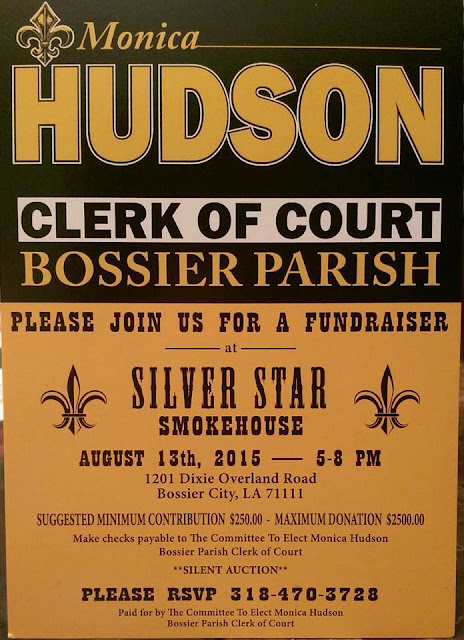 If you are a candidate for office and would like to address the voters with your platform for office, please send a few paragraphs to mybossier@gmail.com and we will publish it.  Attach a picture if you like and we’ll include it.
Posted by Jim at 10:26 AM 12 comments: