I've had some requests for a sample ballot and for information on the Constitutional amendments. Here is a generic sample ballot for Bossier Parish. Note that some precincts will have local elections, such as Mayor of Benton and Police Chief.

Here is the summary of Constitutional amendments from the Secretary of State:

1. Act 873 (2012 Regular Session) adds Article VII, Section 10(F)(4)(g).
Present Constitution authorizes the legislature to establish a procedure to determine if
there will be a projected deficit and an adequate method for adjusting appropriations to eliminate the projected deficit.
Present Constitution exempts the following from such adjustments: (a)  The Bond Security and Redemption Fund or any bonds secured thereby, or any other funds pledged as security for bonds or other evidences of indebtedness; (b) Severance tax and royalty allocations to parishes; (c)  State  and statewide  retirement  system contributions; (d) The Louisiana Education Quality Trust Fund; (e) The Millennium Trust, except appropriations from the trust; and (f) Monies not required to be deposited in the state treasury.
Proposed Constitutional Amendment retains present constitution and  further
provides that the  Medicaid Trust Fund for the  Elderly is also exempted from such adjustments.

5. Act 868 (2012 Regular Session) adds Article X, Section 29(G).
Proposed Constitutional Amendment authorizes the legislature to provide for the forfeiture of all or part of the benefits from a public retirement system, plan, or fund in this state by any public servant who is convicted of a felony associated with and committed during his public service or employment.  Further provides that the legislature may provide for the application of all or part of  any  forfeited retirement benefits to the unfunded accrued liability of the system, plan or fund.
Proposed Constitutional Amendment provides that the forfeiture of public retirement benefits shall apply  only  to persons employed, re-employed, or elected on or after January 1, 2013 and only to retirement benefits earned on or after January 1, 2013.

6. Act 869 (2012 Regular Session) adds Article VII, Section 21(L).
Proposed Constitutional Amendment authorizes the governing authority of New Iberia to enter into contracts to provide for the exemption from ad valorem taxes on property annexed by the city after January 1, 2013, which contracts are effective only if approved by a 2/3 vote of the members of the governing authority of the city.  Further provides that a  contract shall grant the property owner the exemption for up to  five calendar years and the contract may be renewed  for up to five additional years if the renewal is approved by a 2/3 vote of the members of the governing authority.
Proposed Constitutional Amendment requires all property exempted pursuant to a contract to be listed on the assessment rolls and submitted to the Louisiana Tax Commission or its successor and that no taxes shall be collected during the period of the exemption; however, the exemption authorized shall in no way affect or impair the security of any bonds payable from the proceeds of the tax.  Authorizes the legislature
to provide by law for implementation of these provisions.

8. Act 871 (2012 Regular Session) adds Article VII, Section 21(L).
Proposed Constitutional Amendment authorizes the Board of Commerce and
Industry to enter into a contract granting an exemption from ad valorem property taxesfor property owned or leased by, and used by, a targeted non-manufacturing business in the operation of its facility.  Further provides that the exemption is available only to a business which has at least 50% of its total annual sales from its Louisiana site or sites to out-of-state customers or buyers, or to in-state customers or buyers for resale to an out-of-state customer or buyer for ultimate use, or to the federal government or any
combination thereof.
Proposed Constitutional Amendment provides that the first $10,000,000 or 10% of fair market value, whichever is greater, of the facility property, the land underlying the facility and other property  pertaining to the facility  on which ad valorem taxes have previously been paid, inventories,  consumables and property eligible for the manufacturing exemption shall not be exempt.  Further provides that the contracts shall only be available in parishes which have agreed to participate in the program, in the manner provided by the legislature by law. 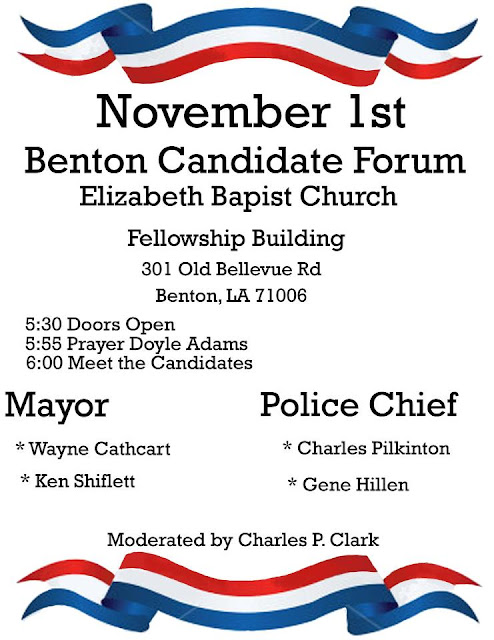 Judicial Candidates will be in South Bossier Monday


The three candidates for District Judge will be in attendance at the South Bossier Citizen’s Assembly meeting on Monday. Whit Graves, Mike Nerren and John Slattery will be there for a meet and greet at 5:30. The meeting is at 6 PM.
State Senator Barrow Peacock and Councilman Scott Irwin will also attend.
The meeting will be held at the Shady Grove Recreation Center at 3949 Wayne Avenue.


If anyone is interested in checking out the contributions to the candidates for judge, here are the links.

I don't know why, but some comments are not showing on the post regarding the judge's race. There are over 200 comments, I honestly don't know if the number of comments affects it or not.
Let's use this post to continue discussion on the judge's race or anything else you feel inclined to discuss.
Posted by Jim at 7:11 PM 57 comments:

Email ThisBlogThis!Share to TwitterShare to FacebookShare to Pinterest
Labels: Comments

If you want to have some family fun and help out a great cause, you need to go to Hot Wheels South tomorrow for a fundraiser for David’s Gift.
A local charity founded in April 2012 by Gabriel & Audrey McCormick, David’s Gift is a nonprofit charity which will provide funds for caskets and other funeral expenses of children who have passed away. David’s Gift is inspired by the McCormick’s son, David, who went to be with the Lord in 2004. By providing this service, parents and family members will be able to plan a special memorial and spend more time comforting each other without having the added burden and stress of figuring out where the money will come from.
Tomorrow's David's Day Fundraiser is more like a festival with bounce houses, facepainting, rock climbing, pony rides, auctions, and concerts!
Hot Wheels South, 1902 Alfred Lane off Barksdale Boulevard from Noon until 7PM.
You can check it out on the fundraiser Facebook Page. David’s Gift webpage is here.

Things that go Boom in the night 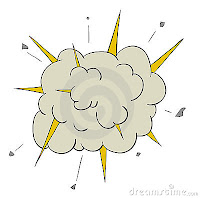 Did you hear it? I did.
Muffled boom, my windows shook in Benton.
First conjecture was that it was a meteorite, now the Webster Sheriff has confirmed it was a bunker explosion at Camp Minden.
The conspiracy theories are a lot more fun.
I posted mine on my personal Facebook account.
The definitive word. It was a meth lab in a trailer in Princeton, blew up. On its way down looked like a meteor. Landed on a bunker at Camp Minden.
Everyone is right.

An unnamed friend one-upped me.
You left out the key part...the Fez wearing folks were behind it.
What's your theory? (Facts be damned).
Posted by Jim at 10:23 AM 14 comments: