An update on Jackson Kennedy

I blogged about young Jackson Kennedy several times back in 2008 and 2009. Jackson, 7 at the time, was diagnosed with a brain tumor in 2008. 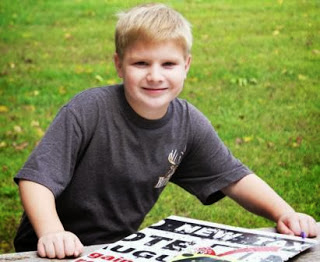 It is back, and Jackson needs your help. Please do anything you can to help this family in the fight.
You can go to his page on Caring Bridge and read his story, and if you are able, make a donation.
There will also be a Wiffleball tournament on November 9th and 10th at the Benton Sports Complex to raise funds. 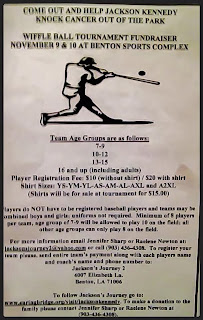 Our friend Pat has a good blog post in And so it Goes in Shreveport about a dedication today in Natchitoches at the grave of Dr. John Sibley, a soldier in the American Revolution. Please go to the link and read it, then come back and read the rest of the story.
The Bossier Connection

So what does that have to do with Bossier Parish?
After his wife in passed away in 1811, Dr. Sibley married a young woman, Eulalie Malique, in 1813. They had a son, Rufus Sibley.
Rufus married Salina Gray Irwin, daughter of Jacob Irwin, who had been a gunsmith for Dr. Sibley at the Indian Agency. Jacob Irwin had located to Bossier Parish (or Claiborne Parish until it became Bossier in 1843), where he had a plantation on the river at Irwin’s Bluff. Jacob Irwin was married to Mary Edwards, who was the daughter of Larkin Edwards, the Caddo Interpreter who received a plot of land in the Caddo treaty that he sold to the Shreve Town Company in 1835.
Rufus and operated a stagecoach stop at Coleville, which is about 5 miles east of . (There is a cemetery at Coleville where Eulalie Sibley, Jacob Irwin and Rufus & Salina are buried).
They raised their family at that location. Rufus built a small house on the property for his mother, Eulalie, and each week one of her granddaughters would stay with her to assist her with housekeeping and cleaning. The only caveat was that they had to speak French during that week, as she didn’t think too highly of the English language.
During reconstruction, the Sheriff of Bossier Parish seized two mules belonging to Rufus for failure to pay Spiritous Liquor taxes at the stagecoach stop. Rufus got a lawyer and filed suit in to recover his mules. He sued on the grounds that the Police Jury was not properly representative under the 14th amendment and therefore any taxes they passed were null and void.
He won the case and the Sheriff had to return his two mules.
The picture below is of the oldest child of Rufus and Salina, Mary Helena Sibley, who married F. M. Hanks.
The picture was taken in 1921, two years before her death. The license plate on the car gives it away.
To make a long story short, her daughter Vivian was my grandmother. She married R. E. Wallace in 1910. My mother was born in 1916, and then in 1947 I was her gift to Bossier Parish.
We're still around.
To me she was just 'Bibby', my grandmother, and one of the most decent and loving people I ever knew in my life. She passed away in 1972. I think of my grandparents nearly every day.
Posted by Jim at 10:19 PM 3 comments: 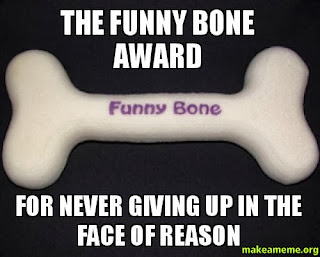 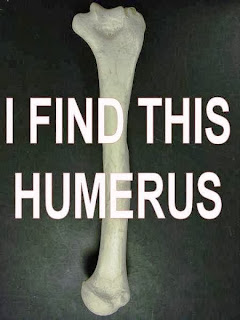