There is a lesson to be learned from the school tax election last Saturday.
The $210,000,000 bond issue was approved – barely – by just over 300 votes out of more than 9,000 cast.
The proposal for employee pay increases was denied, as was the funding for new technology.
This is a shame, as the technology funding was the proposal that most immediately affects our school kids. So far as the employee raises, had it only affected teachers, aides, custodial staff, cafeteria staff and clerical staff I believe it would have passed. In my opinion, what killed it was the idea of giving several people who make over $100,000 per year a hefty raise. In tough economic times, people who are struggling on half that amount or less were not just not willing to do it.
As for the bond issue, it was a grudging yes after a hard discussion. As a sidenote, I thought the celebrations by School Board members and upper-echelon employees were somewhat disgusting. They were acting like giddy teenagers when they needed to show the voters that they take them seriously.
A lot of people are also questioning why the board rolled back the current millage when they could have used the full millage to meet some of the needs that they now claim are urgent.
Bossier Parish voters have a hard time saying ‘no’ to anything for our schools. With two renewals coming up next year, this really should be a wake-up call to the board and the administration.
Professor Jeff Sadow addresses these questions in ‘Normally compliant voters send Bossier schools message’.
Technology
The state has mandated end of course testing for core classes, sort of a graduation exit exam. Again, this is mandated testing that must take place within a certain time frame.
These tests are all computer based.
Also, the new Common Core curriculum is now upon us and that is also a computer based testing mandate. Unfunded, of course - the state isn't interested in buying computer labs for public schools.
Seniors in Bossier Parish are required to complete a Senior Project prior to graduation; they must present this project to a panel of judges from the community. The presentations are more often than not on a Powerpoint presentation which requires...you guessed it - technology.
It is difficult to make a Powerpoint presentation on an older laptop that constantly has to be rebooted during the presentation.
I have talked to a couple of teachers, and they are more upset about lack of funding for technology than they are about being denied raises. Although some people seem unaware, our teachers really do put the interests of their students – our children – first.
This is from a Bossier Parish teacher:
I went into my classroom this morning and put a new box of Kleenex on the desk for the kids to use. I put it next to the large bottle of hand sanitizer that I bought at the same time.
Then I opened a package of  notebook paper and put in the tray for the kids without paper to use. I bought that, too. I also opened a new package of pens and one of pencils to put in the cup for those kids who get to school with nothing to write with.
The pencil sharpener to sharpen those pencils? I bought it.
When I wrote today's assignments on the board I used dry erase markers that I bought at WalMart.
When the kids left today, because so many were sneezing and sniffling from allergies, I wiped the desks down with Anti-Bacterial Wipes that I bought at Super One.
How many dollars have I given away out of my own pocket to kids that are thirsty after school or don't have lunch money?
In the evening I grade papers and make lesson plans.
As the election results came in Saturday night, KTBS posted an update on their Facebook feed. The comments there were nasty. Not all of them, but there were plenty that were just uninformed, false, and hateful. One person suggested that teachers "eat less" and another said that most of the teachers he sees are driving fancy and expensive cars. Speaking just for myself, for the past few years I drove a twenty year old car that was second hand when I got it; it had no heat, no radio, bad tires, cracked seats and an overheating problem. I don't see a lot of luxury vehicles in the parking lot, to be honest.
The Lesson
So what is the lesson that is to be learned?
It’s not only for the School Board, but for all elected officials as well.
City officials who are up for re-election next year, and those who will present themselves for office should also take notice.
The people are tired of the status quo and are beginning to demand accountability and will not accept mismanagement of the resources that they willingly have given to public bodies in the past.
This tax election is just the beginning.
Posted by Jim at 12:07 PM 40 comments:

Patrol officers, Detectives, Juvenile and Narcotics offiers arrested Angela Evette Jenkins, Jessica Renee Flournoy and Ellis Ray Flournoy Jr. and charged them with a variety of crimes.
Child Protective Services took custody of the three year old and two other children who were at the apartment.

KTAL has the complete story on the Ark La Tex Home Page.
Posted by Jim at 7:51 PM 14 comments:

Pssst - it's not really pee

This Saturday will determine whether voters approve three propositions being offered by the Bossier Parish School Board. As I noted in an earlier blog post, the first is for $210,000,000 in bonds for construction. The second is to approve a new tax for employee raises. The third is for technology.
Bossier Parish voters have a history of opening their wallets for schools. These propositions, however, have drawn some opposition. The most recent is from the Bossier Parish Republican Executive Committee.
Here are links to articles both pro and con.


School employees haven't had a raise in seven years. I have heard opposition to the pay proposal because, simply put, a lot of people don't want to raise the salaries of some upper echelon who already make $100,000 per year plus, while they have no objection to raises for teachers and support personnel. This may be a problem.
The other objections that I have noted are that there are no plans beyond the construction of facilities for payroll and maintenance associated with them.
Another objection which is noted is that the election itself will cost about $85,000 and could have been held during last month's election. The school board insisted on having it on the April 21st date on its own.
That decision may backfire on them if the opposition organizes.
Prediction - I don't have one at this point. At first I assumed that it would pass, but now I'm not so sure. We'll find out Saturday.
Posted by Jim at 8:33 PM 56 comments:

The Bossier Parish School Board issued a statement about the suspension of Airline baseball coach Toby Todd. As the statement explains, Todd sent a text to a few players suggesting they watch a video of Augie Garrido, the head baseball coach at the University of Texas, who was captured on the video having somewhat of a meltdown. Garrido is one of the winningest coaches in NCAA history.
“Upon return from Easter Holidays, we were informed by parents that Coach Toby Todd, Head baseball coach at AHS, texted some of his players on the bus coming back from a game in the West Monroe Tournament in early March, for them to go to YouTube and view a video of University of Texas head coach, Augie Garrido, Flips Out — a video of the coach addressing his team following a loss. Immediate investigation revealed that the YouTube video was totally inappropriate and was misrepresentative of the expectations and philosophy the BPSB adheres to for coaches and athletic programs. Coach Todd has been disciplined for violation of the BPSB policy related to Electronic Communications Between Employees and Students and has been place on administrative leave from his coaching duties pending further evaluation and assessment of this incident. Coach Todd has taken full responsibility for his poor choice in this incident and has personally apologized to his players.”
Even taking into account the fact that coaches are not particularly known for their sensitivity, this was terrible judgment on his part, as he acknowledged.
Here is that video if you haven’t seen it. Be warned, the language is explicit and profane. 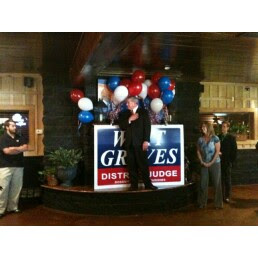 Whit Graves made it official last night. He formally announced his candidacy for the vacancy caused by Judge Bolin's retirement. Former Louisiana Supreme Court Justice Joe Bleich is filling the seat until the election.
Graves served for 12 years with the Louisiana State Police, then completed law school in Baton Rouge at LSU. He served for 12 years as an ADA in Bossier Parish, and has been in private practice for 12 years.
He will have a campaign website and a Facebook page up soon. We will let you know when they are available.
Posted by Jim at 7:38 AM 12 comments:

The Bossier Chamber of Commerce has come out against the $210,000,000 bond issue that the School Board has proposed.
You can read the story at the Press-Tribune.
Bossier voters generally approve these things, but opposition is mounting against this one.
I still hope that the pay raises and technology funding will be approved.
Posted by Jim at 11:11 AM 46 comments:

Bossier City Mayor Lo Walker ended speculation today and announced that he will run for re-election next year.
Walker cited the Cyber Innovation Center and the Northwest Louisiana Veterans Home as two big accomplishments of his two terms in office.
Of course he didn’t mention the layoffs in the city work force during this last term, or the fact that unclassified city workers haven’t had a raise during that term.
He also didn’t mention cutbacks in the police and fire departments, or the firemen’s pay debacle.
But we won’t dwell on that, it will all come out in the race.
Councilman Don Williams is certain to announce for the office, and a couple of other names are being mentioned. Former State Representative Jane Smith had expressed some interest in the office.
Expect some more to pop up.
The last city elections were a pretty boring spectacle; the mayor had no opposition and only one candidate, Marsha McAlister, challenged for city council. This round will be quite different, it might be a bumpy ride.
Councilman David Jones has stated that he will not run again, and if Bubba Williams announces for mayor, that will leave a second city council seat open.
Add to that the District 5 seat that Larry Hanisee won by 2 votes – I don’t know if Tommy Harvey can resist another run – or will he eye the mayor’s race?
Hang on to your seats!
Posted by Jim at 12:24 PM 16 comments: