Judge Jay Caraway qualifies for re-election to Court of Appeal

Judge Jay Caraway has qualified as a candidate for re-election to the Second Circuit Court of Appeal.

In 35 years as a lawyer, including 20 years also being a judge, the Republican resident of Bossier City has seen more than 6,000 legal disputes, with approximately 2,500 being appeals of criminal and civil judgments. He was also selected by the state Supreme Court to sit on the Judiciary Commission, and was invited by the Louisiana State University Law School to be an adjunct professor.
Judge Caraway touts his appellate court experience as a distinguishing qualification in this election. "I dealt with major appellate cases as a lawyer, and argued before the appellate courts of this state and the U.S. 5th Circuit," he said. "That cumulative experience prepares me for the next set of facts, for the next dispute that I will see as a judge; and working with other judges, we can reach the proper resolution under our law."
Judge Caraway credits his roots in the North-Central Parishes of Louisiana as the life experience that prepared him for his public service as judge.
This November 8 election covers the parishes of Bossier, Webster, Claiborne, Union, Lincoln, Caldwell, Bienville, Jackson and Winn.
To learn more about Judge Caraway visit judgejaycaraway.com.

If you are a candidate for office and would like to address the voters with your platform for office, please send a few paragraphs to mybossier@gmail.com and we will publish it.  Attach a picture if you like and we’ll include it.
Posted by Jim at 9:34 PM 2 comments: 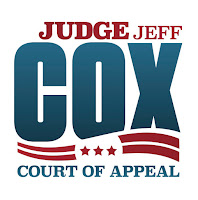 Judge Jeff Cox qualified today as a candidate for the Second Circuit Court of Appeal.  Judge Cox has been re-elected twice without opposition as a District Judge in  Bossier and Webster Parishes.  These two parishes comprise a majority of the votes in the Second Circuit race.  The other seven parishes include:  Bienville, Caldwell, Claiborne, Jackson, Lincoln, Union, and Winn.
A Republican with broad support from the law enforcement community, Judge Cox understands the concerns expressed by law enforcement and the broader community about criminals being released from jail and felony sentences being reversed.  “I am honored to have such strong support of people from every walk of life—especially our law enforcement officers,” Cox said.  Judge Cox is the only candidate in the race with courtroom experience as a prosecutor and trial judge.  He favors strict interpretation of the Constitution and is opposed to legislating from the bench.
Judge Cox continues to be a strong advocate for the elderly, and he supports Second Amendment rights.
Judge Cox, a native of Webster Parish, resides in Bossier City with his wife, Susan, and their children:  Gabrielle and Stephen, who are students at Louisiana Tech University.  Judge Cox serves as deacon and teacher at First Baptist Church Bossier and is a member of a number of civic and wildlife organizations.
For more information, visit electjudgejeffcox.com.