Seems like people down here love to gripe about the cold/hot, you choose. In a lot of cases it comes in the same month. Highs in the 70's or Highs in the 40's. Lows around 20 or lows around 60. It could be worse, though. We could be in Ontario. Of course, I'm sure that the people there love their cold weather. The snow is beautiful. I found this video on YouTube and wanted to share it. 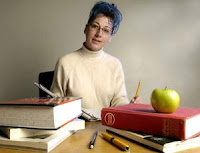 Watch out Cookie Monster. Being blue isn't cool in Vivian.

Ask Jennifer Harmon. The 39-year-old mother of one recently was told her blue hair was unacceptable after nearly a week of substitute teaching at Vivian Elementary/Middle School.


But Harmon, whose appearance has remained the same since early 2006 and was evident during her substitute application process, doesn't think it was her hair color or an accompanying nose piercing that got her in trouble. Rather, it was religion.

The same early December day a fellow substitute teacher asked if she was Wiccan, Harmon found herself in Principal Jamie (Rene) Tolbert's office answering questions about her appearance and whether she had discussed religion with students.

"Not only was I extremely confused and upset because I was never made aware of any policy prohibiting teachers from having blue hair and nose piercings, but when (Tolbert) asked me about religion I started to panic," said Harmon, who said she is not Wiccan and does not subscribe to any particular religious faith. "Of course, I never spoke to the children about religion. I would never do such a thing."

Complete link to The Times story.
Posted by Jim at 10:58 AM No comments:

Have a Holly, Jolly Christmas

I heard that old Burl Ives song on the radio at about 8 this morning while driving to work. The song has been with me since.
You know how it is when a song does that to you - just won't get out of your brain (it's been 13 hours now).
Sleep will come soon and maybe I'll lose it, but the thought is planted there anyway, and it's definitely not a bad one.
So from us to you, a very Merry Christmas.

Bossier Parish has been growing by leaps and bounds for the last few years. There are indications that this growth is slowing; the question is whether it is just in Bossier or if it is indicative of the economy as a whole.
An example would be the number of instruments filed with the Bossier Parish Clerk of Court. For the month of November 2007, total conveyance and mortgage instruments are only 80% of what they were in 2006. I have not broken this down as to how many real estate conveyances, etc, but it doesn't seem encouraging.
Regardless of what the national economy does, if Bossier gets the Cyber Command Center (announcement due in February), we will see phenomenal growth for quite a while. My understanding is that California, New Mexico, Nebraska and a couple of other states are vying for the command. The local and state government have put up huge amounts of money for development.
At this point, we can only wait and see.
Posted by Jim at 7:59 PM No comments:

The $50,000,000 addition to the Bossier Parish Courthouse is finished, and renovations on the old building will be complete in February. The first floor was opened December 3rd. The official ceremonies were held a few weeks ago, and an open house was held on December 4th to show off the building.
Bossier Parish is the fastest growing parish in the state, and the parish government had to keep up with the growth. If you have occasion to go to the courthouse, you will be impressed.
Posted by Jim at 8:30 PM No comments:

Bossier Then and Now: Schools

Picture of School Class on Linton Road in Bossier Parish in the late 1880's. The teacher, Lucien Wallace, was educated at Mt Lebanon College, the forerunner to Louisiana College.
The student on the far left was his younger brother David Wallace, who went on to Mt Lebanon and became a vice-president of the T & P Railroad in Dallas.
The students were educated in basics - math, english, science, and the classics. Considering the times and resources, they turned out to be a pretty literate lot.
Fast forward to today. Schools in Louisiana are in a crisis. The dropout rate is staggering, and state and federal regulations have a stranglehold on the classroom.
In an article in Vote the Record it is pointed out that of scores in 30 developed nations in math, only four scored lower than the United States. Two scored equally and if my math is right, that means that 23 scored higher.
U S schools scored lower than the average in other subjects. Read the article; it is good food for thought. 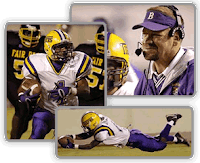 Everyone had hopes that Benton would make it to the 4-A championship game this year, but those hopes were dashed when Bastrop won the semi-final game last week in Benton.

What a great year for the Tigers! They made it to the semi-finals and played with the heart of champions. Hopefully next year it will be all the way to state!

Welcome to My Bossier! This is a blog for Northwest Louisiana, not especially dedicated to any one subject but open to all. We will start posting in a couple of days and hope everyone will enjoy.
Posted by Jim at 8:53 AM No comments: