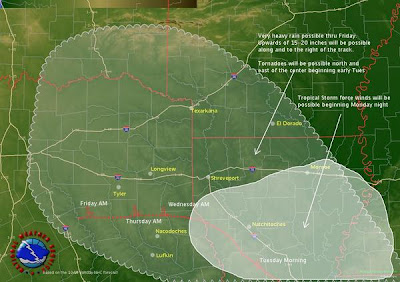 Click on image to enlarge
Every parish in the state has declared a state of emergency, with the exception of Richland, Webster and Bienville.

Somewhere in the neighborhood of 60,000 to 75,000 evacuees are already in northwest Louisiana, staying in public shelters, private homes, campgrounds, hotels and other residences. More than 1 million people from south Louisiana have, or will soon have to, evacuate.
· The major shelters in the Shreveport area, including those at Louisiana State University-Shreveport, Southern University at Shreveport, the Hirsch Coliseum and others, hold about 8,500 beds, virtually all of which are now full.Evacuees are being redirected at those sites to other shelters farther away from Shreveport. Homeland Security officials hope to soon add another 2,000 beds throughout the city, but now are redirecting evacuees to other parishes, as well as those in Alabama, Arkansas and Texas. More out-of-state shelters are opening now that Louisiana is sending word that their shelters are filling up. The CenturyTel Center in Bossier City will act as one of the staging areas for buses headed to other shelters.
· Bossier City also has agreed to allow people with RVs and campers to park in the CenturyTel Center’s parking lot and come inside to use the bathrooms and facilities, though the center itself will not, as of Sunday, be used as a shelter.
· Red River South Marina and Resort, near the CenturyTel Center, has also agreed to allow people with RVs and campers to park there, and use their facilities.
· Bossier City Chief Administrative Officer Lynn Austin said that anyone with campers or RVs who needs help finding a place to stay can actually call his cell phone: (318) 465-5949, or his home phone number: (318) 746-0184.
Posted by Jim at 12:59 PM