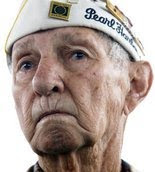 Pearl Harbor survivor James Cook of Slidell was honored during a ceremony Monday at Pearl Harbor Park in Chalmette, Cook, 84, was on the USS Rigel (AD-13) during the bombing of Pearl Harbor on Dec. 7, 1941. The Rigel, originally built in 1918, was at the American base in Hawaii for an overhaul when the Japanese attacked. The ship was only slightly damaged; its crew, unable to fire, immediately turned to rescue and salvage operations. The Chalmette observance of the 68th anniversary of the bombing was sponsored by the Pearl Harbor Survivors Association.
From NOLA.com