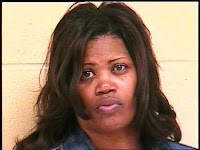 Patty Johnson is being charged with forgery after she was captured on camera using a credit card without authorization. Ms Johnson took the card from a patient while working as a social worker at The Bradford nursing home. She is being charged for a $1,452 transaction.
She also faces felony charges in Bossier City for the same crime, this time for $1,636.
She is being booked into Caddo Correction Center and later will be transferred to Bossier Parish Maximum Security.
This is the lowest of the low - stealing from helpless people who are in your care. I'm anxious to see the charges.
I am also going to investigate and see if she has any previous charges. If you have relatives who are residents in nursing homes, you are familiar with theft by staff. It is not usually for such a large amount, but certainly isn't uncommon.
We will follow up on this one.
Posted by Jim at 1:31 PM