The Best Little Whorehouse in Shreveport

It was built around 1890 by Michael Rosenblath and was a bordello from 1903 to 1917, but now it's going up as a sacrifice to Shreveport's new movie industry.
Josie Cooper must be rolling over in her grave as the building that housed her bordello is being burned for the HBO series True Blood. The house is at the corner of View and Douglas streets just off downtown.
Local Historians Eric Brock & Gary Joiner say the house falls within the boundaries of the St Paul's Bottoms Historic District. It is the last building in the old red light district that is still in decent condition. Brock says the city must have a permit from the state to demolish the structure. Mayor Cedric Glover disagrees. "All the i's were dotted and t's crossed," he said. "This was on the list of homes to be demolished and has been for some time."
Two crews from SFD Station 1 controlled a small blaze yesterday. Another burn is coming later in the week. If you're on Common Street and catch a glimpse of it, don't be alarmed; it's just our past going up in smok 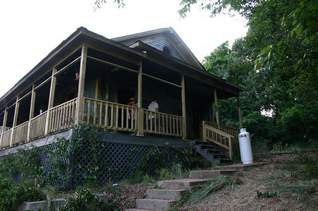 Complete article in The Times.
Posted by Jim at 5:59 AM