Just thought I’d throw in some highlights from 2009.
The culmination of a bitterly fought judge’s race arrived in January when Mike Craig took the oath as 26th JDC judge. He seems to have had a good first year.
On the negative side, the first of the school board thieves entered a guilty plea in federal court.
The school board was in disarray, Ken Kruithof resigned and in May D. C. Machen, Jr. was appointed superintendent.
June brought a plethora of news and events.
Shreveport rapper Hurricane Chris stirred up a storm when he performed before the Louisiana Legislature.
Pop Culture Icon Michael Jackson passed away, leaving mourning fans around the world.
Kaboom! Billy Mays died at age 50. Seems he had used cocaine a few days earlier and that contributed to his death. Who woulda thought?
LSU won the college world series, Geaux Tigers!
The trashy story of the year also comes out of June. This was a tight one, between Cucumber guy (remember him?), the woman who knocked her mother out in Benton and then pooped on her (Woman knocks Mom out in Benton then poops on her back).
The winner, however, has to be this ballbuster: Woman Attacks Scrotum - Judge Orders Protection
October brought surprises too, the arrest of a 26th JDC ADA and the brouhaha that ensues when a public official is treated as if they were an ordinary citizen.
The story of the year, however, developed when Bossier City Mayor Lo Walker announced the layoff of 117 city employees, most in the Police and Fire Departments. That announcement started a firestorm that finally culminated in the City Council proposing and adopting a budget of their own which had far fewer 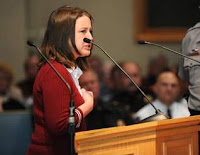 cuts.
This brings us to My Bossier’s most influential person of the year, Heather Carter.
Since this is still in everyone’s memory, I won’t burden you with a lot of details. Suffice it to say that Heather stood up and led the fight to oppose the cuts, recruited 3,700 people to a Facebook Group in support of that effort, and swayed the City Council and greatly affected the final outcome of the budget process.
Congratulations Heather!