We Saw That story on Roy Brown causes stir 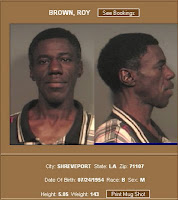 KTBS reported on the story of Roy Brown, who was sentenced to 15 years in prison for first degree robbery. According to Channel 3, Brown, 54, of Audrey Lane, pleaded guilty in Caddo District Court to robbing the Capital One bank in December 2007. Brown admitted walking up to a teller with one of his hands under his jacket and telling her it was a "stickup."The teller handed the man three stacks of bills and he took a single $100 bill, told her he was homeless and left, police said.Brown surrendered to police the next day, telling them his mother didn't raise him that way.Police let him sober up and interviewed him two days later. Police said Brown told them he needed money to stay in a downtown detox center, had nowhere to stay and was hungry -- so he walked up the street and robbed the bank.

The Alexandria blog We Saw That reported on the story and has received a lot of attention from it. It is linked all over the world.
Read the blog and check out the response on We Saw That.