Governor Jindal has been flying all over the country holding fundraisers for his 2011 run for governor (not for president, wink wink). The poor fella hit a snag the other day when the plane that had been arranged to take him to North Carolina became unavailable. No problem, our boy has friends.
In an exclusive, The Old River Road reports that Jindal found alternate transportation:
The private jet, which seats seven, has a cost of $2,500 per hour! But not to worry — Jindal is not paying a dime. Rather, Alton Ashy, a fellow passenger on this trip and Louisiana’s top gambling lobbyist, is footing the bill.
A free ride to pick up fundraising checks in a private jet funded by the state’s top gambling lobbyist — now that’s something even ol’ Edwin would be proud of.
The Old River Road, in an attempt to keep up with our high-flying governor, has a new regular feature “Where’s Bobby?”. We will link it on our sidebar so you can keep up regularly. 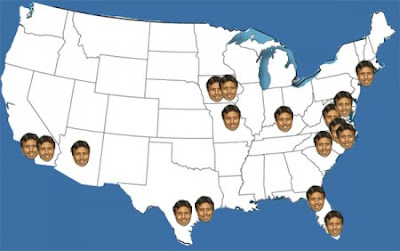