Woman knocks Mom out in Benton then poops on her back 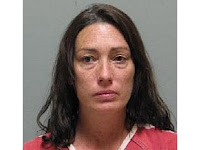 The Bossier Parish Sheriff's Office arrested a mother and daughter Tuesday after a physical altercation got out of hand.
37-year-old Destinie Duvall, of Willis, Texas and her mother 62-year-old Patricia Hacker of Benton were arrested according to deputies after getting into a physical fight with each other.
According to deputies, Duvall knocked Hacker out of a chair and then kicked her in the head, causing Hacker to lose consciousness.
While Hacker was unconscious, Duvall defecated on Hacker's back, said deputies.
Posted by Jim at 4:52 PM