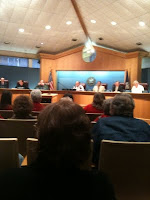 The Bossier City Council met yesterday and presented their version of the 2010 budget. The council has heard a lot from constituents about the proposed layoffs, and not very much of it was favorable. They have stepped up and worked out a compromise plan which basically is what we outlined in an earlier blog post: “ . . . the plan spares 20 policemen and 20 firemen from the Mayor’s ax. Of the remaining 37 cuts across different city departments, 16 will be spared and 21 will be laid off.”
The council has never been so involved in changing a budget, and the public has not been so interested. Hopefully this process has awakened the people of Bossier and they will take more interest in the process from now on.
The budget needs 4 votes to be approved, and in the event that the mayor sees fit to veto it, 5 votes to override.
You can view the council's version of the budget here.