Bossier City Councilman David Jones: 'there is an alternative' 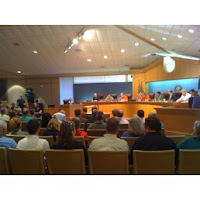 The Bossier City Council will meet Tuesday at 3pm and it should get interesting. For the first time since the proposed budget cuts, people will be allowed to speak.
Ordinarily, the council allows 3 people from each side of an issue to speak. Hopefully, the council will relax the rules Tuesday and allow more people to express their opinions. People are angry and feel that they have been ignored by several of the members, while several have responded promptly to calls and emails.
One member who has been communicative with the people is David Jones, who represents District 4 on the council.
I spoke to Councilman Jones today at length and he was very adamant on his view of the proposed layoffs. "I will not vote for any budget that includes public safety layoffs'.
The gentleman does not mince his words. "There is an alternative, and that is to make cuts in the budget in other areas to make up half of the deficit, and to use surplus money to buy us time to assess the situation and make adjustments where they are needed."
Part of Jones' plan would be to freeze hiring and to let attrition begin to lower personnel. He also would like for the council to look at the finances monthly in detail to see where the city is headed and what additional steps would be needed.
"I believe we can achieve our goals without the heartache and personal hardships to so many families", he told me. "We have had unexpected expenses this year and that threw things out of kilter. We (the council) are working very hard for a solution."
A large crowd is expected to attend the Tuesday meeting.
Posted by Jim at 6:11 PM