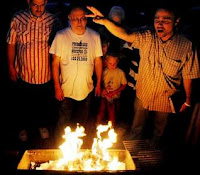 Excerpt:
About 30 people gathered for a regional revival Friday night that included a book burning as a statement to reach out to local residents.
"It is allowed for Harry Potter to be taught in our schools, but not the Bible," International House of Prayer pastor James Crawford said during the Shreveport Regional Unity of Faith Revival.
That is one reason pastors from several denominations and races ripped pages from "Harry Potter and the Sorcerer's Stone." Those and pages from a pornographic magazine were put into a burn pit and set afire as praises bellowed from the congregation.
"As I tore the pages, I felt a generational curse of immorality and perversion breaking off my family," Adriane Banks said. "I felt it."
The book burning was a statement to reach out to people in Shreveport-Bossier City against sin, Crawford said.
"This is powerful. God looks down and sees humble hearts. That is the reality of what we're doing."
Crawford said recent natural disasters are a wake-up call.

Why did The Times publish this story? Thirty people? The Times puts this on the front page as a 'news story'? Thirty people out of a Shreveport/Bossier population of over 350,000?
What do these people hope to accomplish other than drawing a comparison to the Spanish Conquistadors or the Nazis?
I admit that I'm prejudiced; I love Harry Potter. I bought my grandson all seven of the books and, of course, read them as soon as he got through with them.
The Times also had to include the Hagee-esque remark about 'natural disasters' being a warning. God bless the people of New Orleans who have had to listen to this shit (oops, just slipped out) for the last three years from so-called 'Christians'.

Sort of reminds one of the SPOOF SITE Landover Baptist where they deal with the same subject:

The burning of books is nothing new to True Christians®. We invented the practice over two-thousand years ago as a way to promote our faith in the Lord Jesus. In the early days of Christianity, when new believers in Christ were converted, they were naturally moved by the Holy Spirit to grab as many books as they could and pitch them into a fire. Unlike the sissy "Jesus is Love" fake-Christians (whom both the Lord Jesus and we loathe) we have running around today, the early followers of Christ were never ashamed to burn books.