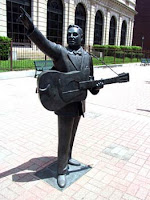 Lead Belly was born to Wesley and Sallie Ledbetter as Huddie William Ledbetter in a plantation near Mooringsport in Caddo Parish. By 1903, Lead Belly was already a singer and guitarist of some note. He performed for Shreveport audiences in St. Paul's Bottoms, a notorious red-light district. Lead Belly began to develop his own style of music after exposure to a variety of musical influences on Shreveport's Fannin Street, a row of saloons, brothels, and dance halls in the Bottoms. (The Bottoms area was officially named Ledbetter Heights several years ago.)
In the statue above, which is on Texas Street in front of the Chamber of Commerce building downtown, Leadbelly is facing The Bottoms, about 4 blocks away.
During one incarceration at Angola prison, Ledbetter met folklorists John and Allen Lomax, visiting southern prisons to collect folksongs for the Library of Congress. The Lomaxes were instrumental in gaining Lead Belly a pardon from Gov. O. K. Allen. Ledbetter formed a professional relationship with Allen Lomax, who brought him to the attention of a wide audience. He toured the country playing songs like Goodnight Irene and Bourgeois Blues.
In 1939 he was back in jail for assault. Upon his release in 1940, Lead Belly returned to a surging New York folk scene, and befriended Woody Guthrie and Pete Seeger. Seeger adopted the 12 string guitar as a result of Lead Belly's infuence.
Ledbetter died in 1949 and is buried at the Shiloh Baptist Church outside of Mooringsport.
Many versions the old ballad 'House of the Rising Sun' have been recorded, one very popular version by The Animals in the 1960's, others by Bob Dylan, Pink Floyd & Joan Baez. In late 1948 Lead Belly recorded a version called "In New Orleans" in the sessions that later became the album Lead Belly's Last Sessions

Yet the very best version I have ever encounted is sung in Japanese by a Japanese artist, Chiaki Naomi. See what you think.