Time to take the flag down 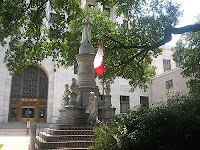 Today the Caddo Parish Commission voted 11-1 to remove the Confederate flag from the front of the courthouse.
I think that it is time to fold the flag and put it up.
I have heard the arguments both pro and con. On the pro side is the argument that it is part of our heritage. Generally speaking that might be true, but the flag at the courthouse doesn’t represent that heritage. It is true that the last Confederate flag to come down was at that location, and that should be properly noted. The flag at the courthouse isn't there to commemorate that event.
I love history, and I love the history of our area. I love the history of my family and try to pass it down to the younger people in the family.
Three of my four great-grandfathers fought in the Confederate army.
But that flag doesn’t represent them, the history of the location or even of the era. That flag was put up in my lifetime, and it was put up in defiance of an ever growing civil rights movement.
There were things that had to change, and needed to change. The flag at the courthouse was put up in opposition to that change. Simply put, the change came and it is time to take it down.
Posted by Jim at 9:07 PM