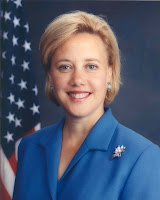 Former Governor Dave Treen has endorsed Mary Landrieu. Treen, the first Republican governor of the state since Reconstruction, said he was backing Landrieu because of her bipartisan record.
"Louisiana cannot afford to lose Sen. Landrieu's effectiveness in Congress," Treen says. Treen is one of 27 Republicans to endorse Landrieu, her campaign says.
Landrieu faces Democrat/Republican John Kennedy in the November 4 election.
Posted by Jim at 1:42 PM