Everyone has had an eye on the battle between Dr. John Fleming and Chris Gorman in the 4th District's Republican Primary. It has been very nasty so far, but you ain't seen nothing yet. As the two face off for the November 4th runoff battle, it is likely to get a lot worse.
Not suprisingly, it was a close race. Dr. Fleming received 14,500 votes to Gorman's 14,070. Jeff Thompson wasn't too far behind with 12,693. I believe that Thompson started too late and that Jim McCrery's endorsement on the day of his announcement probably drove away more supporters than it attracted. Look for Thompson to throw his support to Dr. Fleming.
On the Democratic side Paul Carmouche received 36,930 votes to runner-up Willie Banks' 17,620. This will be a clean runoff, with none of the acrimony that the Republicans are displaying.
I have pointed out before that the 4th district is a conservative Democratic district. These numbers prove the point. Paul Carmouche received more votes in the Democratic primary than both of the Republicans combined. Col. Banks received more votes than either.
Some of those Republican votes will go to Paul Carmouche in the general election.

There he goes again
Republican blogger Associate Professor Jeffrey Sadow, ever fearful of anyone who claims to be a conservative Democrat, is already warning the Republican candidates to go the extra mile to prove they are conservative:
"Therefore, the GOP nominee must be a solid conservative who won’t give ammunition to a negative campaign about themselves that will throw them off the message tying Carmouche to his liberal Washington masters."
Ah, those liberal Washington Masters. I think Associate Professor Sadow must have nightmares about them, his fear is so palpable. He wasn't, however, able to provide a photo of Carmouche hugging Barack Obama at a secret conclave at Bohemian Grove while the two were plotting to overthrow the government and the American Way of Life. I'm sure it wasn't from lack of trying.
My Bossier, however, has managed to get a photo of Nancy Pelosi waiting to show Paul Carmouche just who is in charge. 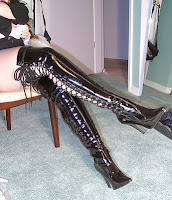 DISCLAIMER: I support none the of the above named candidates. My support goes to independent Gerard Bowen, Jr, about whom we will be sharing more in coming days.