"What makes America special is what's in this room tonight." 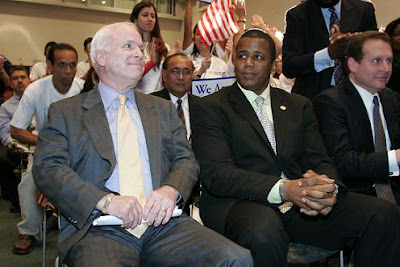 John McCain recently said that "The Association of Community Organizations for Reform Now, or ACORN, “must be investigated.”
“No one should corrupt the most precious right we have. That is the right to vote,” he said to applause.
His campaign later issued a statement highlighting Barack Obama’s past legal work for the group, saying “he has a litany of concerning associations that should be fully examined.”

Well, let's examine those associations, as well as McCain's.
Above is a picture of McCain giving a speech at an ACORN rally in Miami in 2006. Below is a video of the meeting.