Governor Jindal held a short Town Hall meeting at the courthouse on Tuesday afternoon; he said a few words, got on the news and had pictures made with a group of students.
It is not his first visit to Bossier's Parish seat and won't be his last. Bossier Parish, after all, is one of only two parishes in the state with more folks registered as Republican rather than Democrat. If you would like to see the registration in each parish here is a link to the Secretary of State's website.
Here are Bossier's numbers:
Total Voters 66,331
Democrat 24,359 36.7%
Republican 25,264 38.1%
Other Party 16,708 25.2%
While I have hardly been a Jindal fan, I believe that John McCain did himself a disservice by picking Sarah Palin over Bobby Jindal as his running mate. Jindal has a much better grasp of the issues and is a better communicator.
Frankly, he comes across as smarter than Sarah Palin.
In any event, he is headed to Iowa next month. Policiticans don't visit Iowa by accident; it is a clear sign that he is looking ahead to 2012 and is starting to develop his prospects.
A lot of blogs and commentators are already mentioning Jindal for President in 2012. Don't look for a Palin/Jindal ticket, however. He isn't going to play second fiddle. 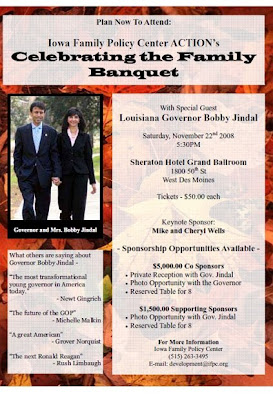