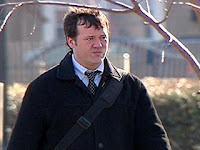 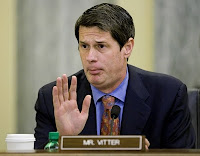 Not much (nothing) has appeared on the local blogosphere about the firing of Senator David Vitter’s aide, Brent Furer. Furer, who had a domestic violence assault conviction in 2008 and has a history of DWI problems, has been in charge of women’s issues for the Senator.
Just a couple of questions. Why wait until election year to finally do something about this? Was Furer released only because Vitter sensed political problems on the horizon?
Vitter, who was accused in his first run for the senate by Vincent Bruno, a Republican State Committee member, of being involved with a French Quarter Hooker, confessed to a "very serious sin in my past" after his phone number was found on a Washington Madame’s phone records. Of course, Vitter claimed that the New Orleans charges were untrue. Probably just a strange coincidence.
Vitter, who teamed up with ex-senator Larry ‘toe tapping’ Craig in sponsoring the ‘defense of marriage act’ a couple of years ago, has long been a supporter of ‘traditional values’. He has quieted down somewhat on this front since he got caught, instead spending most of his time on other, more traditional conservative causes.
If Furer was a top aide to Mary Landrieu, a Democrat, Louisiana’s ‘Christian Conservatives’ would be running in circles having hissy fits. Strangely enough, they have been very quiet about Vitter and his aide.
It just comes down to one question – does personal character count in the people we elect to serve us? In Louisiana, this is generally a rhetorical question, because we all know the answer.
Although several top Republicans expressed interest in the seat, in the end they lacked to courage to stand up to the power of a sitting senator.
No doubt Vitter’s voting record appeals to many Louisianans, and Rep. Charlie Melancon, his Democratic opponent, generates very little enthusiasm.
But there are alternatives, and we will explore them in a future post.
Posted by Jim at 7:56 AM