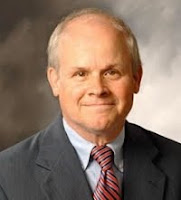 David Melville, Pastor of Fellowship Methodist Church on Barksdale Boulevard, has thrown his hat in the ring for the 4th District congressional seat. Melville, who wants to replace Dr. John Fleming, says that Fleming got caught up in partisan fighting on the health care issue rather than trying to make it a better bill.
Melville says politics has become too divisive, and that politicians are only worried about winning or losing. That's true, but it's not a new phenomenon.
I'm certain that Melville is sincere, but every politician who runs for office promises to work across the isles. That seldom happens.
Melville is married to the sister of former Governor Buddy Roemer.
Posted by Jim at 7:32 PM