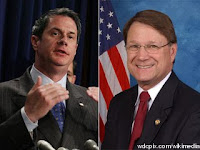 Qualifying will begin Wednesday of this week and run through Friday for the 2010 elections. Once all the dust has settled and we see who all will be running for Bossier Parish School Board, we will get in-depth into that election.
I will keep a close eye on the Shreveport City elections.
The race for U. S. Senate, whether I like it or not, is going to be a walk-through for David Vitter. Charlie Melancon is running, at best, a lackluster campaign.
Even if Vitter should be caught in the meantime with yet another whore, it won’t phase the voters of Louisiana. Character has never mattered much down here, and I don’t pretend that it will begin to anytime soon.
Character only matters when someone of another party is displaying a lack of it.
The Lt. Governor’s race might get interesting. The highest profile person, and supposedly the favorite, is Secretary of State Jay Dardenne. His website has only a place to sign up for his newsletters and a place to donate. It has no section for issues.
Roger Villere, a businessman who has served as Chairman of the state Republican Party has also announced.
Kevin Davis, the St. Tammany Parish President has a website up also.
I like Sammy Kershaw mainly because he is not a politician, but an entertainer. Since most of our politicians provide most of our entertainment, he is a natural fit. I predict that he may gain some momentum and surprise a lot of people.
As to State Treasurer John Kennedy and Public Service Commissioner Foster Campbell, I don’t think they will attempt a move. If Kennedy should run and be defeated yet again, he would probably be washed up in Louisiana politics. As for Foster Campbell, I don’t think he will run, but I would never be so bold as to predict what he will actually end up doing.
I will update later in the week as candidates qualify.
Posted by Jim at 10:06 AM