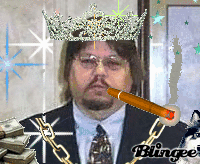 Pictured above, top photo Greg Aymond, as seen by Lamar White.
Second photo, Lamar White as seen by Greg Aymond.
Third Photo, Alexandria Mayor Jacques Roy (Jacques Hitler) as seen by Greg Aymond.
I don’t know where to begin, honestly. Every day I read a number of blogs, and I have mentioned and linked to several Central Louisiana blogs at various times. In December of 2008 I made mention of Alexandria Mayor Jacques Roy’s response to a blogger in this blog post.
Let’s back up and establish our main characters.
1. Jacques Roy, Mayor of Alexandria
2. Lamar White, employee of Mayor Roy, Democratic activist and blogger at CenLaMar
3. Greg Aymond, retired Alexandria attorney and anti-Roy blogger at Central La Politics
4. Von Jennings, former employee of the Roy administration & current mayoral candidate
This has been going on for a while. Last year Greg Aymond sued blogger Ed Hooper of wesawthat for defamation. The suit is currently dragging its way through the courts, as suits tend to do.
Meanwhile, the mayoral election is coming up this year and everyone is jockeying for position. Lamar White is obviously pulling for Jacques Roy while Greg Aymond is very anti-Roy. These two have been at each other for a long time, but now it has intensified.
Enter JacquesBarack, an anonymous website which Lamar White believes is operated by Von Jennings. JacquesBarack has published the phone number of the mayor’s wife, Wendy Roy, in its sidebar. They have also published an imaginary letter from Jacques Roy’s 6 year old daughter.
Need someone to talk to?
Call Wendy at 318.---.----.
or email wroy@+++++.org
Of course, the phone number and email address are not blocked out as I have done.
The Alexandria blog wars have intensified to a fly the black flag (show no quarter), scorched earth, burn the bridges full fledged conflict.
Fast forward to this morning. Lamar White published this.
To me, Greg Aymond’s rants are frequently pathetic, paranoiac, absurd, and ridiculous; they are dangerously detached and often bigoted.
And perhaps this should not be surprising, considering Greg Aymond was once a member of the Ku Klux Klan and recently blogged about the “N**** Street Thugs” of Alexandria, among other things.
Unless and until Von proves otherwise, I will continue to believe that she is personally responsible for the content posted on the website JacquesBarack.
If Von really wants to become Mayor of Alexandria, then she would be wise to publicly and permanently distance herself from the fools who publish the website that endearingly endorses her.
Otherwise, Von Jennings is nothing more than a cowardly bigot.
And yes, I mean it: If Von Jennings refuses to reject the abject hatred posted by her most outspoken online advocates (at JacquesBarack), then Von Jennings is nothing more than a cowardly bigot.
You can’t simply get away with publicly harassing the Mayor’s pregnant wife, Von.
Greg Aymond responded with this on Central La Politics. (Greg refers to Lamar as “Fred”, because apparently Lamar is his middle name.)
Jacques Roy's best blogger in Cenla, paid employee of Jacques and the City of Alexandria, and our own resident clown, Fred White, showed off his wit in his post entitled "Duplicity, Dishonesty, and Dirty Politics".
Fred is attacking me, once again, and Jacques Barack. I guess that he doesn't like Jacques Barack because he or she talks negatively about Fred's hero, Jacques Roy, and since Jacques Back (sic) refers to, I presume, Fred as the fetally alcohol challenged.
Now I don’t have a stake in Alexandria politics, and have only tried to fairly portray what is going on. This is somewhat akin to a man and wife getting into a fight in a public place and everyone watching thinking “hey, we can see you!”
“Alex”, at Alex Cenla’s Rants and Ravings, has resisted being drawn into the conflict, and has called for peace. Alex, I don’t think they are listening!
Posted by Jim at 9:27 AM