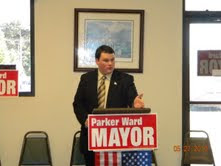 I am asked this question most often, “Why run for mayor now?” I see the potential of making Shreveport the greatest city in Louisiana. We have the greatest guitarist in the world living in our city, James Burton. We need to use the music industry to bring in tourist to our city. We live in the cradle of the stars; Shreveport has produced many stars such as Elvis, Johnny Cash, and many others. We have a great music industry and we should use it to our advantage.
Abraham Lincoln said “A house divided against itself cannot stand” and “Every kingdom divided against itself is brought to desolation; and every city or house divided against itself shall not stand: And if Satan cast out Satan, he is divided against himself; how shall then his kingdom stand? …. (Matt 12:22-30)
The Scriptures and a great president knew a house divided cannot stand. Shreveport has been divided too long over racial and political issues. In City Hall the left/right ideological battles that take place on a daily basis is ruining respect, dignity, and honor. The people show great disgust in the current City Council and Mayor. They see our local leaders are out of touch with their bosses, the ones they are elected to represent. The office of Mayor is an honorable position that should be held with great respect, but that honor and respect is not present. The people feel that is it time for a freshness that only comes like a breeze after the storm. Right now we are weathering that storm.
Right now, we are fighting with one another; we are allowing racial pride to step in the way of moving forward to the future. If we stay divided for much longer Shreveport will not be the shining city on the hill in Louisiana. We have to turn on the lights and invite progress into our city. We have show a united front met with love and compassion. When we do this we will fulfill the promise that ALL men are created equal in the sight of their creator. We need to stand together and work as one unit.
With my opponents all you get is party bickering, but with me you get less taxes and government and more personal freedom and liberty.
This is my simple platform:
· I believe in creating jobs in Shreveport by my economic plan. I plan on completely eliminating city start up tax on businesses for the first five years of operation and cut the ad valorem property tax altogether.
· I want to create jobs in the private sector by reducing the number of public sector jobs.
· I want to completely eliminate permits or a tax to protest in Shreveport. It is our freedom to assemble peacefully and why should we be taxed for a right and a freedom?
· I want to limit intelligence collecting by the police officers and strictly enforce the Fourth Amendment of the Constitution.
· Balance the budget by living within our means and only spending what we bring in, this is true fiscal responsibility
If you are a candidate for any office and want to get your message out, email me with a few paragraphs about why you believe you should be elected and we will publish it. Send it to mybossier@gmail.com.
Posted by Jim at 8:41 PM