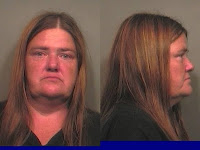 A family friend of 73-year-old Ernest Luttrell is the second person arrested in connection with his homicide, said Caddo Sheriff Steve Prator.
Tina VanMoerkerque, 44, was booked into the Caddo Correctional Center today on a charge of first-degree murder. VanMoerkerque lives behind Luttrell's house in a mobile home at 12292 Greenwood-Springridge Road. She did housekeeping and ran errands for the Luttrells, according to detectives.
VanMoerkerque was questioned by sheriff's detectives about her relationship with Erick Crain, who was arrested on Tuesday for Luttrell's murder. VanMoerkerque admitted knowing Crain, spending Saturday night with him at a motel, and driving him to Luttrell's house on Sunday morning. She said she instructed Crain about how to get into the house and commit the robbery.
The investigation into the homicide is continuing.
Posted by Jim at 6:40 PM