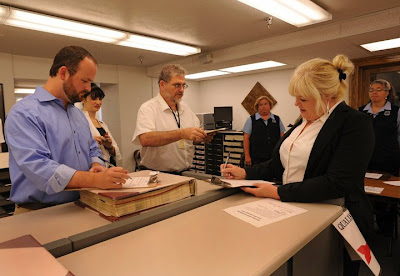 Above, Jake Toloso and Deborah Allen fill out their paperwork to qualify at the Caddo Parish Clerk of Courts' office.
The Shreveport City Council race looms large because only two of the seven current members will be returning. Joe Shyne (District F) and Ron Webb (District E) are both unopposed in their bid for re-election.
I am linking campaign websites that were readily available through a Google search.
In the race for the District A seat, currently held by Calvin Lester, are Rose Wilson McCulloch, C. O. Simpkins, Lillian Thomas Wade and Michael D. Williams.
Seeking the District B seat currently held by Monty Walford are Deborah Allen, former Mary Landrieu staffer Jeff Everson, Craig B. Lee and Sheva Sims.
Oliver Jenkins and Jake Toloso are running for the Michael Long’s District C seat.
Deanna Candler, Michael D. Corbin and Phillip A. Templeton are seeking the seat held by Bryan Wooley, who is running for mayor.
Joyce Bowman surprised a few people when she announced that she wasn’t running again because of health problems. Looking to be elected to that seat are Caddo Commissioner Sam Jenkins Jr. and Jerry L. White.
If you are a candidate for any office and want to get your message out, email me with a few paragraphs about why you believe you should be elected and we will publish it. Send it to mybossier@gmail.com.
Posted by Jim at 9:00 AM