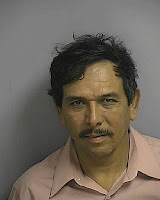 Osceola County deputies said a man was arrested on Thursday after two girls complained of being touched inappropriately in a hotel swimming pool.
Deputies went to the Clarion Hotel in the 7600 block of West Irlo Bronson Memorial Highway in
Kissimmee at about 9:30 p.m.
Two girls, ages 10 and 13, said they were swimming in the pool when a man touched them inappropriately several times. The girl told their parents, who reported the acts to hotel management.
Read the rest of the story here.
Melendez was booked by Osceola County with two counts of lewd and lascivious molestation.
Posted by Jim at 1:12 PM