Drunk kills woman on I-20 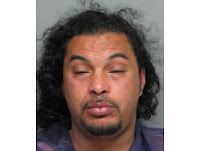 A 66 year old woman was killed last night when she had car trouble on I-20 near Hamilton Road.  She got out of her car and was hit by a car which left the scene.  She was pronounced dead at the scene of the accident.
Luis Diaz of Shreveport later called 911 and said that he had hit someone on I-20.  Diaz has been charged with vehicular homicide, DWI second offense, felony hit and run and driving without a license.
Posted by Jim at 2:14 PM