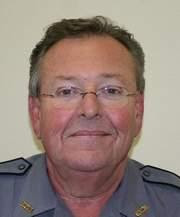 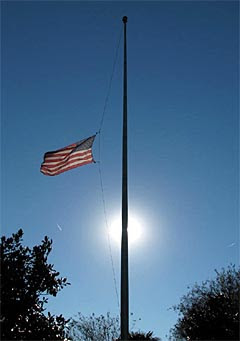 Flags will be flown at half mast in Bossier City on Tuesday as funeral services for Johnny Wyatt will take place at 2PM at First Baptist Church.  Interment will be at Hill Crest.
Visitation will be Monday from 5 until 8.
I think everyone is aware of his many accomplishments as City Marshal, so I won't spend time on that.
Johnny Wyatt the man was more than the office he held.
Johnny had deep Bossier Parish roots.  His mother and my mother and their siblings all grew up together in Benton.  His grandfather drove a school bus back in the 1920's.  Johnny and I discussed that a couple of years ago on the sidewalk in front of the Parish courthouse.
Just another personal note.  About 8 or 9 years ago, when my grandson Tyler was about 10 or so, he made a trip with me to City Hall to the City Clerk's office.  As we got there, court had just adjourned and cleared out.  Johnny was coming out of his office, and asked Tyler if he would like to go in and see the courtroom.  Of course he did, especially with an escort from this impressive, uniformed man.  They spent about 5 minutes in the courtroom.  When Tyler came out, he said "Papa, I saw where the judge sits.  You don't ever want to get into trouble and go in there!"
I think that defines Bossier City Marshal Johnny Wyatt, and Johnny Wyatt the man, as well as anything I can think of.
Johnny, thanks for your service.  You will be missed.
Posted by Jim at 2:13 PM