﻿The race for Lieutenant Governor will be decided on November 2nd in a runoff between Republican Secretary of State Jay Dardenne and Democrat Caroline Fayard. Dardenne had 28% of the vote to Fayard’s 24%. Sammy Kershaw came in 3rd with 19%.

Fayard is a New Orleans attorney and a political newcomer.
Kershaw did carry Bossier Parish with 32% of the vote to Dardenne’s 24%. 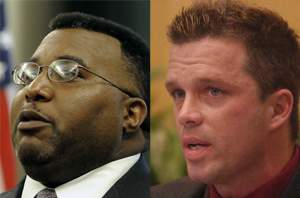 To no one’s surprise, the race for Shreveport mayor will be decided in a runoff between Democrat Cedric Glover and Republican Bryan Wooley. Glover garnered 45% of the vote to Wooley’s 31%. Roy Burrell, backed by Greg Tarver and Keith Hightower, only polled 13%.
So a Lawyer and a Banker walk into a bar . . .
Well, not really, but that was too good to pass up. In the race to replace Wayne Waddell in the state legislature, Shreveport attorney Alan Seabaugh handily won with 5,085 votes to Banker Harold Turner’s 3,778 and will represent the 5th District in Baton Rouge.
The Shreveport City Council races shape up as follows:
District A: Runoff between Rose McCulloch & C. O. Simpkins to replace Calvin Lester.
District B: Runoff between Jeff Everson & Sheva Sims for the seat now held by Monty Walford. In the last election, Walford edged out Sheva Sims by just 6 votes
District C: Oliver Jenkins won with 84% of the vote over Jake Toloso
District D: In the seat that Bryan Wooley vacated in order to run for mayor, Phillip Templeton & Michael Corbin will be in a runoff
District G: Sam Jenkins will replace Joyce Bowman.

Bossier School Board
Allison Brigham, Tammy Smith, Jack Raley and Eddy Ray Presley will be returning to the Bossier Parish School Board. The closest race was District 9, where Presley defeated Ed Jackson by only 4 votes.
In District 11 Barbara Rudd defeated incumbent Lindell Webb with 55% of the vote to Webb’s 45%. Rudd was the only candidate, to my knowledge, who said she favored the roll-forward in the tax millage rate, which was nixed by the board last month.
Sandra Darby will replace her brother (Julian I think, I get them mixed up!) in District 10.
District 12 – Wow! Kay Padgett Byrd got exactly 50% of the vote for this seat, with 556 votes. Martin Bourgeois had 338 votes and Mike Tucker 218 votes. 338 + 218 votes = 556 votes. One more vote for Byrd and she would have been elected outright.
In the only other Bossier Parish race, Kenneth Stiles won election as Plain Dealing Alderman.

All results are as reported by the Louisiana Secretary of State
Posted by Jim at 6:57 AM