Mayor to residents: “Find yourself a nice hotel”

Mayor Lo Walker’s advice to the 25,000 or more residents faced by flooding in Bossier City and in South Bossier was “Find yourself a nice hotel”.
That might get a little crowded.
Shreveport/Bossier has a total of 9,500 hotel rooms. According to the Tourist and Convention Bureau, at the latest count they were maintaining a 73% occupancy rate, the highest in the state. That would leave about 2,400 rooms available for the 25,000 folks.
Shelters have been opened at Platt Elementary School on Hwy 80 in Haughton and at the old Parkway High School on Panther Drive.
The city has decided not to open the convention center as a shelter.
Meanwhile, the mayor’s subdivision is being evacuated. Wonder which shelter he chose? 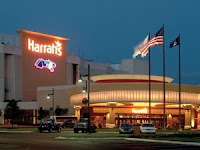 Levee Breach threatening Louisiana Downs
A minor levee breach on Red Chute Bayou has already been reported near Louisiana Downs. If the levee breaches, the complex could see waters up to 5 or 6 feet.
Residents are evacuating from Stockwell, Brookhaven, Victorian Point, Carriage Oaks, Carriage Oaks Crossing, Stonebridge and Richmond Cove subdivisions.
In South Bossier, the sheriff’s office and Wildlife & Fisheries have boats available to help evacuate anyone trapped by high water.
The sheriff’s office can be reached at 965-2203.
Posted by Jim at 5:49 PM