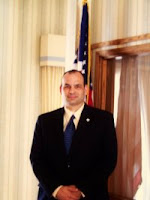 It appears that Dr. John Fleming will have a Democratic challenger for the 4th District congressional seat this fall.
At this point I'd have to put the odds against him. I don't see Dr. Fleming being defeated in this district, but elections sometimes take unusual turns and it's early in the year.
His website has the usual political stuff on it, he wants to work across the isle, he wants to make things better etc., but the site is short on solutions and details. Maybe it will fill in as we go.
Gavi has a brand new Facebook page here if you desire to check it out.
From Mr. Gavi's website:
Steven J Gavi was born in Frankfurt, Germany to Staff Sergeant Manuel C. Gavi and Juanita G. Gavi. He grew up in Chaves County in New Mexico. His childhood years were spent in the small farm town of Dexter, New Mexico where he learned to appreciate the hard work and struggles of local farmers and ranchers. His early childhood was spent with an absent father who was serving in Vietnam. Even though he was young, he understood the importance of his father’s absence. His teenage years were spent in Roswell NM where he was active in his high school and church.
Steven always looked forward to serving the less fortunate. He served in American homeless ministries and participated in service projects in foreign countries. He loved seeing people smile when he gave them a new hope for their lives. He set out to serve his nation just like his father but was injured early in his military career and his dream of following in his father's footsteps was ended. He received his Criminal Justice Degree from Eastern New Mexico University Roswell. After graduating, he spent two years working in the Juvenile Correctional system. He also worked in the lumber industry for Kruse Enterprises and understands the importance this industry plays in Louisiana and the rest of the nation. He has recognized the important role the movie industry is playing in our state’s economy. Steven recently spoke out to help prevent local firefighters and policemen from losing their jobs due to city budget cuts in Bossier City. He has been a retail manager for the past seven years. Steven is married to Robyn Miller Gavi and has two children, Gabrielle and Jacob.
Posted by Jim at 7:27 PM