State Legislature: Get a clue 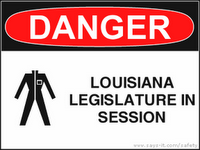 The State House of Representatives seems to be in a quandry over the practice of representatives changing their vote after a measure has already been voted on. It has, in fact, become a point of embarassment.
The rule was changed early in the Jindal administration in a smoke and mirrors attempt to fool the people into thinking that the practice had been eliminated, when in fact it had become easier to practice. Now, in a further attempt to fool the people, the legislature is considering a new rule, or possibly even a law, that would change nothing.
Speaker Jim Tucker said that he was researching the way other state legislatures handle vote changing.
How about researching the way that the Louisiana Senate handles it. They have a rule that says ‘When the yeas and nays are taken on any question, no senator shall be permitted, under any circumstances whatever, to vote after the decision is announced from the chair.’
In the Louisiana Senate, no vote is ever changed after the fact. Ever.
Is it really so difficult to adopt that same rule in the House?
Posted by Jim at 9:52 AM