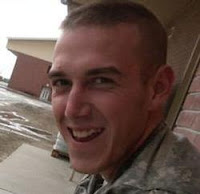 More on Spc. Joshua Tomlinson from KTBS, entire story here.
Excerpt:
The family of a Webster Parish soldier who was killed by a suicide bomb in Afghanistan headed to an Air Force base in Delaware on Thursday to accompany his body home for burial.
Army Spc. Joshua Tomlinson, 24, of Dubberly, was among five U.S. soldiers killed on Tuesday in Kabul. The Army said a bomber detonated a vehicle near a U.S. convoy.
Three of those who were killed were officers. Tomlinson was part of a security detail for high-ranking officers, a family member said. He had been in Afghanistan for eight months and his tour of duty was scheduled to end in July.
Tomlinson's father and his widow were headed to Dover Air Force Base in Delaware, where the fallen soldiers are being returned. They will accompany his remains to Webster Parish, where services are pending. They are expected to return on Friday.
Tomlinson was assigned to a Special Troops Battalion in Germany. Family members said he and his wife had no children; their baby died about a year ago at the age of three days.
The bombing, which was part of the Taliban insurgence, killed the five U.S. soldiers, a Canadian military officer and at least 12 civilians. Another four dozen people were wounded.
Posted by Jim at 4:29 PM