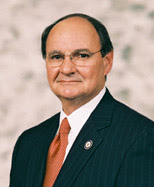 Benton’s own Robert Adley is getting a good deal of national attention over his bill to shut down the Tulane Law Environmental Clinic. The clinic gives law students experience by doing pro-bono work, quite often in opposition to big energy.
The ABA Journal, a publication of the American Bar Association has an article dealing with the bad timing of the bill, proposed as millions of gallons of oil are coming ashore on the gulf coast from the BP rig collapse.
The San Francisco Examiner has a story, as does Mother Jones. The Advocate of Baton Rouge and nola.com, the internet arm of the Times-Picayune are also on the story.
The bill started out as one to deny funding to any university whose law school has a clinic that sues the state for anything. Adley is narrowing the bill to only include environmental clinics.
This indicates to me that his concern is much more about the oil companies’ money than the taxpayers’ money.
In its original form the bill made some sort of sense in that the state shouldn’t subsidize someone who is suing the state. In the new form he is saying that the state shouldn’t subsidize someone who is suing the state as regards the environment, particularly when the target of the suit is an energy company. Apparently any other suits are now okay.
I have to agree with the ABA, the timing is just a little bad.
Posted by Jim at 5:30 PM