Two women from Plain Dealing were arrested after a fight last night, said Bossier Sheriff Larry Deen.
Shandricka Shantane Williams, 20, of the 400 block of East Carolina Avenue, and Laniekka Nicole Taylor, 19, of the 900 block of Antrim Cutoff Road, began fighting around 7 p.m. Williams hit Taylor with a brick and bit her. She also hit Taylor’s car with a brick. Both women admitted to fighting with each other.
Taylor is charged with disturbing the peace, fighting. Her bond is set at $150. Williams is charged with aggravated battery and simple criminal property damage. Her bond is pending.

A Haughton man and woman were arrested early this morning on a variety of charges, said Bossier Sheriff Larry Deen.
Kevin Allen Phillips, 28, and Crystal Lee Walker, 32, both of the 4400 block of Camp Joy Road, were taken into custody after a Bossier Sheriff’s deputy stopped a vehicle being driven by Phillips. The deputy was responding to a call from a complainant who said Phillips kicked a woman out of his car and beat her up.
The deputy said Phillips swerved into a ditch just before he was pulled over. When he made contact with Phillips, the deputy smelled the strong odor of an alcoholic beverage on his person, and he told the deputy he was not supposed to be driving. A check revealed a suspended and expired driver’s license. In addition, Phillips performed poorly on a field sobriety test and blew a 0.166% blood alcohol content on the Intoxilyzer.
When questioned by deputies, Walker said she and Phillips got into a verbal confrontation which escalated into a physical altercation. She admitted slapping Phillips in the face and jumping out of the car.
Phillips and Walker were transported to the Bossier Maximum Security Facility and booked. Phillips was charged with driving while intoxicated, improper lane use and driving under suspension. Walker was charged with domestic abuse and disturbing the peace/drunk. 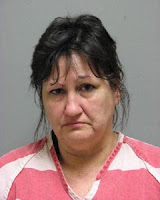 A Haughton woman was arrested Saturday night on two counts of cruelty to a juvenile, said Bossier Sheriff Larry Deen.
Carrie Sue Grice, 51, of the 600 block of Chandler Road, was taken into custody after she became involved in a physical altercation with two juvenile victims. Grice struck a 13-year-old female in the back of the left shoulder near the arm. While Grice was going after the 13-year-old, the victim was trying to push Grice off of her with her feet and hands.
Meanwhile, an 8-year-old victim was attempting to pull Grice off his sister when he was knocked to the ground by Grice. The 8-year-old was struck in the left side of the face near the jaw by Grice’s hand.
Grice, who has now been arrested twice for cruelty to a juvenile, was transported to the Bossier Maximum Security Facility and booked. Her bond was set at $10,000.
Nope, nothing from Benton - just double checked, nope.
Posted by Jim at 4:45 PM