The Silly Season is almost here! 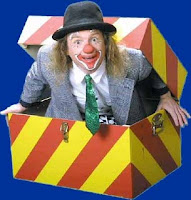 Okay, I admit the picture may be a little unkind, but the silly season is almost upon us, and soon we’ll have some interesting political races to watch - and you never know who will pop out of the box!
We have given a little space already to the congressional election, but so far not a lot to see there. Most interesting will be the school board races and the mayoral & council elections in Shreveport.
Cedric Glover is being challenged by Republican Bryan Wooley and Libertarian Parker Ward. Democratic State Representative Roy Burrell has said that he intends to oppose Glover, but has not declared formally yet. Council races are beginning to shape up and we will get into them later in depth.
We will be looking at the mayoral candidates in the next week or so. Qualifying will be July 7th – July 9th.
The Congressional election will begin on August 28th with the first party primary and again on October 2nd for the runoff primary, if needed. The congressional election is the only one affected this year by the closed party primaries.
October 2nd is also the date for the open primary which is the primary for all of the other races.
General election is on November 2nd.
(Confused yet?)
I’m already hearing a couple of interesting names popping up in the Bossier Parish School Board race, which promises to be a lot more exciting than it has been in past years. I think a couple of new candidates will be coming out in the next couple of weeks.
People are also jockeying for position in next year’s statewide and legislative races, but we won’t get ahead of ourselves – yet.
Posted by Jim at 4:41 PM