The Meaning and Purpose of Memorial Day

Monday is Memorial Day, originally called Decoration Day. It is a day of remembrance for those who have died in our nation's service.
Traditional observance of Memorial day has diminished over the years. Many Americans nowadays have forgotten the meaning and traditions of Memorial Day.
Some people think the day is for honoring any and all dead, and not just those fallen in service to our country. I think a lot of well meaning people simply misunderstand the purpose that was intended for this day, and if they are educated as to the geniune meaning of it, that they will observe it properly.
Memorial day is not to be confused for Veterans Day, which is the day on which we thank and honor all of those who served honorably in the military.
This is a day that we should observe solemnly, not just as the last day in a three-day weekend.
Brave men fought and died on our behalf, and their sacrifice demands that we give them the honor they are due.
On Memorial Day, all U.S. flags should be displayed at half-staff during the morning hours. At noon, they shoul 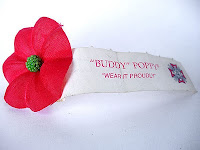 d be raised back to full-staff.
Traditionally, a red poppy is worn on Memorial Day, inspired by the poem In Flanders Field which was written by a Canadian Lt. Colonel, John McCrae after he presided over the burial of a fellow officer.
When I was in school, and even when I was a young man, we always had poppies to wear. The VFW sponsors the ‘buddy poppy’, artificial silk poppies which are made by disabled veterans. Unfortunately, this tradition is being lost, except among veterans groups. Watch for pictures and videos locally of veterans observances and you will see them.
The poem, from WWI, describes the red poppies that covered the battleground and afterward, the rows of graves.

In Flanders fields the poppies blow
Between the crosses, row on row,
That mark our place; and in the sky
The larks, still bravely singing, fly
Scarce heard amid the guns below.

We are the Dead. Short days ago
We lived, felt dawn, saw sunset glow,
Loved, and were loved, and now we lie
In Flanders fields.

Take up our quarrel with the foe:
To you from failing hands we throw
The torch; be yours to hold it high.
If ye break faith with us who die
We shall not sleep, though poppies grow
In Flanders fields.

If you have never properly observed Memorial Day, do so this year. Remember Joshua Tomlinson and Wayne Culver, and all of the other brave men who have fallen on the battlefield.
Posted by Jim at 8:32 PM